This year we were able to attend the Taminick Military Encampment Weekend in Victoria. It was during the second week of my mid semester break so I had a furious week of sewing to prepare. Nic required longer sleeves on his Brunswick Jacket and I needed a summer weight dress as I only have one for the cold, and new linen petticoat. As always I ended up sewing on site, which provided me with an activity while waiting for the water to boil for coffee and gun cleaning.

Thankfully the sleeves and petticoat were completed before we left for the event. 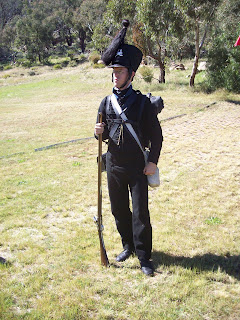 Sorry I have no photos of the petticoat, but I do have some of my handsome husband in his new sleeves. 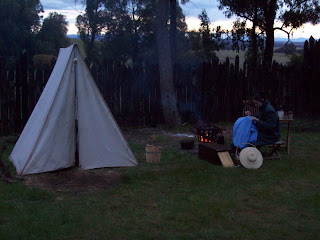 Sewing my summer weight dress with the last of the light. 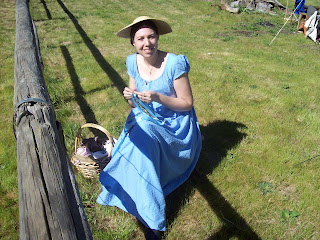 This dress was made for warmer days at the campsite for ease of wearing and with a shorter skirt to avoid the mud and wet grass.
*Dress done now for the hat ribbons. 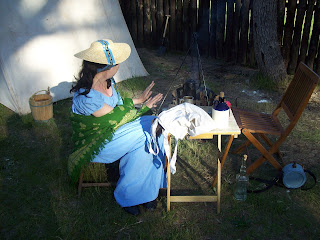 The weekend was very busy with constantly changing weather from rainy and cold, to sunny and warm,. The men were kept busy during the day with multiple black power musket, rifle, cannon and drill competitions. During the evenings there was entertainment to be had around the fires and on the Saturday evening we had an impromptu dance that was a highlight of the weekend for all who participated. 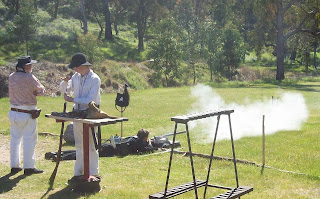 Nic shooting laying down, in the Sniper Shoot, he came first with a score of 94/100 at approximately 90 yards. 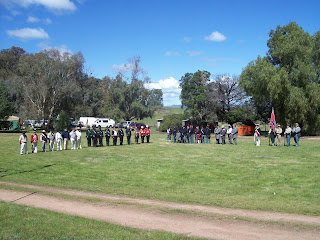 Parade on the final day. Unfortunately due to the poor weather on the preceeding days there was a lack of numbers as many left early the night before.
Posted by Danielle Grguric at 4:27 AM No comments: